It started snowing in EGR on Thursday and on Monday, it's still snowing. We got snow and blizzard conditions (which are pretty difficult to meet apparently) right through Christmas.  It's been a long time, not since the Polar Vortex, that we have had this much snow.

It doesn't help that we are in the lake-effect snow alley; and once it fires up, we get a lot of snow. Even for those of us who have been living like this for a while, it's a bit much.  Below is our poor grill; we cleaned if off once during the storm. What's piled on there is from round two of the snow. 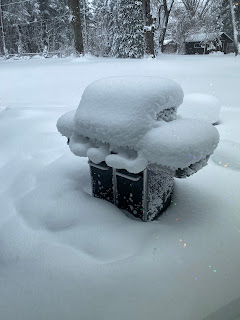 Before the chaos of the storm, I was able to meet a friend for breakfast. The benefit of having breakfast in a small town is running into other friends.  One of my other friends made mention of my ongoing commentary on TFG and his corrupt administration. He told me how much he appreciated the writings and my perspective. I laughed when I told him that was not a universally-held opinion; I have lost friends and distanced others because of my beliefs.
In further conversation, what has changed is I am no longer gagged by a job that requires neutrality. I don't want to do work that requires me to stay silent on issues that matter.  So I don't. And that has some repercussions, all of which are worthwhile.
The vote recount in Michigan for Proposal 2 and Proposal 3 is done.
On Proposal 2, which was approved to provide nine days of early voting, the recount included more than 59,000 votes in four counties. The Proposal 2 recount found an additional 14 yes votes and 20 no votes.
The recount of Proposal 3, which voters approved to enshrine abortion rights in the state constitution, encompassed about 626,000 votes across 43 counties. The recount initially found 116 additional yes votes and seven extra no votes, for a net gain of 109 yes votes.
This was an interesting quote from one of the Board of Canvassers:

Tony Daunt, a Republican and chairman of the canvassing board, said the recounts should put to bed questions about tabulators, which have persisted since Republican Donald Trump lost the 2020 presidential election and falsely claimed the contest was stolen from him.
“Ultimately, since 2020, in particular, there’s a segment of the population that’s been deranged by Donald Trump’s nonsense, and it’s carried over into this cycle,” Daunt told reporters. “What’s positive is it’s a much smaller contingent of people.”

When conducting a recount, there are a number of reasons for small changes in outcomes. But it's done and, in Michigan at least, we have better voting rights and women's rights. Who the fuck thought I would be writing this in 2022?
From the frozen tundra of West Michigan.
Posted by Deirdre Honner at 4:49 PM