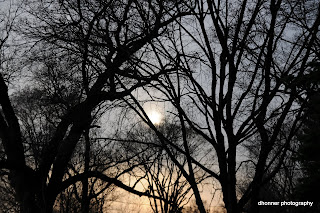 Paul and I have both been under the weather and for the first time ever, Paul is really sick and I am just moderately sick. So we have been taken it easy. We watched our beloved Red Wings kick the wind out of Columbus Bluejackets. Really unimpressed with Columbus and Ken Hitchcock. Hope the Wings put 'em away in four. I can't stand cheap shots during hockey and it was nothing but low end, cheap shots by Columbus.
I did have some time to take a few happy snap pictures in between naps and meals. The sunset was lovely even with the clouds. Samson also had some fun chasing the flat disk and rolling around in the grass. The kids were out next door, along with Samson's BFF Annie the corgi. Gosh is she cute. :) 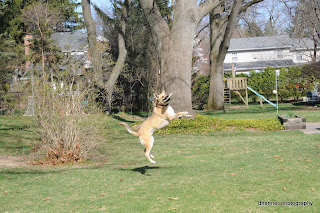 My pictures of airdog Samson are a little bright - didn't have my polarizer on but they are pretty good. He has so much fun with his frisbee. We also took advantage of the warm weather to give him a bath. It wasn't high on anyone's list but he was a little stinky. Now he feels and smells good.
Not too much excitement in the G, but life is good. G'night from all of us.
Posted by Deirdre Honner at 8:20 PM