Life, the universe and everything

Christmas was marvelous. Christmas Eve, we started with holiday cheer at good neighbors, had dinner with our Grand Rapids parents and finished the eve with a holiday nightcap at our other neighbors. Dinner with the parents was incredible - tenderloin, Yorkshire pudding (for which we absconded with the recipe), creamed spinach (fabulous, fabulous) and Paul's apple pie for desert. For you food aficionados, all the recipes are available on Paul's FoodiesGR blog.

We ended the night with our neighbors Amy and Dennis and their family and friends. Dennis is a patent attorney and Amy's father, Frank, is a retired naval officer. The guys spent the evening helping Paul map out his next move. Dennis is trying to convince him to become a patent attorney...but wise Frank just kept saying, "Take your time..." (Go Frank).

Christmas Day was quite low key. We played Santa's helpers in the AM for some friends and after all the goodies were delivered, we simply enjoyed the Christmas music and a fire in the fireplace. Unfortunately, Paul's brand new Dell died a painful death (can't find the hard drive) so it looks like it will be making a return visit to Dell to get fixed. Grrrr.... 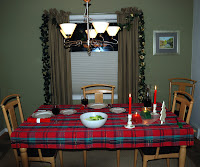 Paul spent some of the afternoon and early evening fielding frantic phone calls from cooks around the country. One was making prime rib and needed timing help, another was cooking his tenderloin recipe and needed help with proper temps ...and so it went. 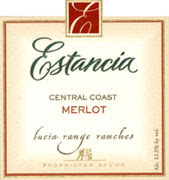 About 2 PM, Paul took out the prime rib to warm up a bit and along with a lovely table, some fabulous mashed potatoes and a simple salad, we had a delicious dinner. With the number of times Paul has made prime rib, we have learned to keep the meal very small since the beef is indeed the focus. We enjoyed our meal with a wonderful bottle of 2004 Estancia Central Coast Merlot.
Samson found it necessary to guard the beef, though we were convinced that it was NOT going to grow feet and walk away.... 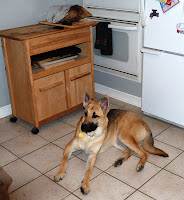 And what is Christmas without a plumbing problem? Plumbing problems and I go WAAAAAY back, back to the time when I said to Paul, "Paul, the furnace is leaking water!!!" (Pause, appropriate laughter here). Well, I now know that furnaces don't leak water and we did get a new water heater that Paul and friends installed all by themselves (wild cheering). Then there was the time when a pipe burst in front of our driveway and after a swift phone call from Paul stationed in NOLA, the good Grass Doctor (our VP of all things at Calvin) came to help survey the problem. After gushing thousands of gallons of water into the streets in single digit temps, the city of East Grand Rapids acquiesced and fixed it on their nickel. (whew). So it could be no surprise that this morning, the day after Christmas day, when dishes need cleaning, that our dishwasher pipe has decide to spew down the side of the basement wall. It's a vision right up there with sugar plum fairies. I was in a panic thinking that some pipe was going to burst wildly and fill our whole basement with horrid, wretched stuff but Paul simply shut off the valve to that particular pipe. When you have a history of plumbing problems like mine, you can't help but imagine worst case scenarios....
The plumber is coming to fix whatever is broken. Though I had NOTHING to do with the problem, somehow it is my fault. We wait and hope that it's a simple fix. For today, so long and thanks for all the fish. ;)
Posted by Deirdre Honner at 8:34 AM

Ugh...water problems were the bain of my existence in my house on Lyon St. Leaking basement = $3,000 waterproofing. Leaking chimney = $800 rebuild of chimney from the roofline up. Plaster damaged by water leaking through chimney = $1,200 replaster job in bathroom and basement hallway. Leaking sunporch = tear down sunporch to the studs and rebuild with new walls, insulation, windows, etc. Crazy. Water...so life giving and necessary, but so costly when left to its own devices. Hope your leaks are minor by comparison.