Well, it's the new year. And already, a GQP shitshow.  Earlier in the week, Heather Cox Richardson wrote this:
One story here is about competence. Josh Marshall of Talking Points Memo points out that Pelosi ran the House with virtually the same margin the Republicans have now and yet managed to hold her caucus together tightly enough to pass a slate of legislation that rivaled those of the Great Society and the New Deal. McCarthy can’t even organize the House, leaving the United States without a functioning Congress for the first time in a hundred years.
This, along with Hakeem Jeffries, gives me some hope.  See his historic speech here. 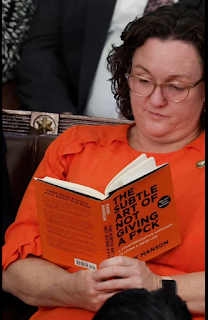 We are supporting a number of candidates including Katie Porter.

Our own Debbie Stabenow will not run again, opening up another senior leadership position in Michigan.  There is a lot of speculation about who may run. Whoever it is, we will support him/her/them as well.

Happy New Year, despite the fucking circus that is the GQP.

From the completely lugubrious, snowless Michigan.

Posted by Deirdre Honner at 2:21 PM