Three years ago we had "The time of our lives"

It's wonderful to relive a fabulous time of our lives. Thanks for letting me reminisce. 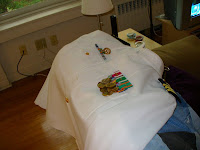 I had intended on writing this week about the week leading up to Paul's retirement. What we did, where we were, who we saw..but truth be told, we were busy with everyday life, the kitchen, the doggy day care and (embarrassment) the Olympics. I got so in to watching the Olympics that much else fell to the way side.

I have a photo album in my Google account called "Last week in the Navy." Now, I wasn't IN the Navy but I was married to it, and when Paul retired, it was a day for me too. The week leading up to his retirement ceremony was the perfect blend of chaos and calm. Most mornings, I slept in, took Allie to the beach and hunted for beach glass; lunches were with Paul and his XO Harry, eating at Food Stuffs, the best little restaurant in Lake Forest; and evenings were full of seeing people and saying goodbye.
Paul and I took a spin on one of his whalers, tooling around L 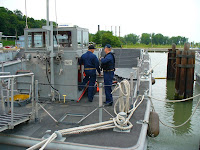 ake Michigan, looking Navy-ish. He also got one of his LCM5 Mike boats underway for one last 'training exercise; and awarded his XO Shawn, the Bronze Star for his service in Iraq. After work, we drove around the base, taking it all in - the marching cadets, the boats, the water, the beach, the Exchange, the housing and the friends. We stayed up every night to listen to taps, a melancholy trumpeter saying good night to base.

The best part of the entire week was getting to see all the people - all the people who traveled great distances AND Chicago traffic to celebrate Paul's career and our transition. Steve came the furthest - all the way from California but closely followed by our 'family' Roy and Mary; Bob and Sue drove and Kristen flew all the way from VA. Paul's old boss, Kevin flew up just for the day - despite a hurricane approaching NOLA; one of his sideboys, Keith Williams drove all the way from Tennessee to participate and celebrate; Lisa came all the way from Arizona, my BFF Linda and her husband Phil drove up from KC and my Calvin family - Henry, Todd, Jennifer, MB, Heidi, Deb and Mary, with family and kids in tow all came. Abi and Steve came while Grace and John were there in spirit taking care of Noah. Our friends and neighbors Dennis and Amy with their kids came too. Paul had three friends from college come - Mark from Indy, Steve and his family from A2 and Andrew from MN. There were so MANY people who joined us to celebrate. The outpouring of love and kindness was quite overwhelming. It was incredible and a magnificent ceremony, followed by a wonderful party - complete with a pig roast. We just didn't want it to end. :) 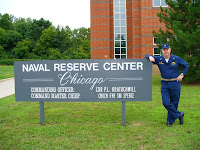 It rained that day and while we were slightly disappointed in the weather, the rain meant cooler temps and no bugs. And that was a good thing!

So a year later, here we are. There is an adage I hear and have no reference but goes something like "live a good life - you will enjoy it a second time around as you reminisce." We spent this week reliving that time and enjoying it just as much. As life marches on, we have so many changes - a couple of new bathrooms, a soon-to-be new kitchen, a new job for Paul and a new furry friend, Handsome Boy. We said goodbye to our home on Lake Michigan - the beach house, we fondly called it, said goodbye to the Navy and sadly said goodbye to our sweet angel, Allie. What a year. It was the time of our life and we look forward to so many more.

Posted by Deirdre Honner at 9:17 AM