Yeah, that's me. The new, improved 'vacation' is to hang out in your own locale, and chill. And I have a WHOLE week of stay-cation. Ahhhh, it's so nice be home and hanging with my peeps and the Handsome One. But more of that to come, so on to the good stuff.

The pumpkins Paul carved were terrific. His had an intricate design requiring carving tools and a drill; mine just required brute force and awkwardness. But in the end, we had two awesome looking pumpkins.

The weather on Halloween was something that couldn't have been written better if it had been scripted. It was warm enough to wear only long sleeves, no coat required. This was the first year of such a late daylight's saving time, so for the first hour, it was light out. It was sort of peculiar. As the sun started to set, we were treated to some lovely colors. With the onset of November, those clear nights will be less and less. As ghouls and goblins flit around, we took a few minutes to revel in the beauty of the sky.

We enjoyed the company of our friends and neighbors. We handed out 100+ pieces candy. adult beverages and some jello shooters. Paul eventually started a fire as it got darker and cooler. We hung out until about 8:15 at which point I was pretty darn hungry and we called it a night. It was a blast. 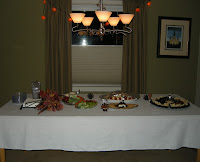 Saturday night was the Kitchen Warming Party. Since the completion of the kitchen, we have not had a proper party, so we decided that it was time. We had a keg of Bell's Amber Ale, a bunch of party trays including some healthy snacks and a load of fun and funny people. It was standing room only and it certainly seemed as if all enjoyed it.

At the stroke of 7pm., guests starting arriving and the last of our friends didn't leave until well after 10pm. After the last of our guests departed, Paul and I stayed up to clean up a few things and then reflect on his retirement and the past year. We marvel at the blessings of good friends, wonderful jobs and a full life. In our wildest dreams, we couldn't have imagined a full Naval career for Paul, a tour in the midwest and a chance to settle in such a terrific place. 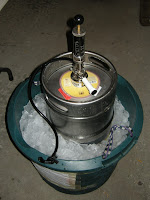 Location is always so interesting to me. There have been a few acquaintances in the last couple of years who couldn't stand living in Michigan. In (individual) conversations, each complained about the people, the weather, the roads, the fill-in-the-blank. I know that feeling well, only it's the feeling I had living in southern California - and I did have authority complain about the traffic! ;) You just have to find where you fit. Each of my acquaintances have moved on - to new locations. Hopefully they each will find where they fit. We fit here. With our friends, our neighbors, our neat house and our Mr. Handsome.

We are enjoying post-party leftovers with friends stopping by this afternoon to help finish the food and beer. If you are in the area, swing by! Enjoy the weekend.
Posted by Deirdre Honner at 11:45 AM

Enjoy your vacation Deirdre. You deserve it.