A friend of mine posted a video of a dog relinquished to the Humane Society, a 10 year old beagle.   My heart broke watching the video.  The caption included this - the family no longer had time for her.

It's hard not to be critical, a little big angry, and a whole lot disgusted.  After 10 years.  Animals aren't disposable.  They aren't convenient until inconvenient.  They aren't garbage you throw out when you don't want him or her any more.

We are here enjoying heaven on earth.  Our little man loves the beach.

Someone threw him away too.  Left him in a park in downtown Grand Rapids.  Until he made his way to us almost six years ago.

While despicable, the person or people who disposed of Samson gave us the most amazing gift.  Yup he was work.  But he has rewarded us in ways that we could have never imagined. 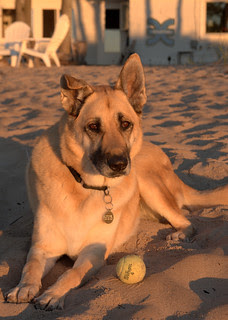 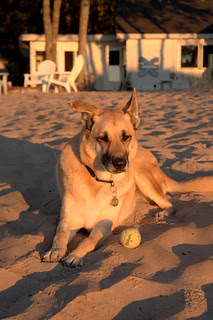 As our vet tech said to Samson the first time we took him to our vet, "Samson, you have hit the mother lode!"  I hope the same kind of home is in store with this sweet beagle.

Cheers from East of the Equator.
Posted by Deirdre Honner at 8:29 AM